It is important when rearing Black Soldier Fly to know how many females you have in a cage. A great quote by Peter Drucker is "If you can't measure it, you can't improve it".  Identifying males from females helps better estimate yields and production in Black Soldier Fly colonies. Identify them by their physical features is the primary way of sexing.

You can only tell the sex of a Black Solider Fly once it has reached the end of its lifecycle and turns into the reproductive phase. This is the perfect time to estimate as you can either underproduce from a ratio of too many males or overproduce because of a ratio of too females.

Since pupas harvest on the same day will develop into adult Black Soldier Flies over a varying amount of time especially in colder climates, the majority of the Black Soldier Flies may have died off while a small group may lag behind. By telling if there is a higher female ratio in the cage you would be able to tell if it's worth it to start a new colony or continue production.

The male black soldier fly has a plate-like structure on its tail end. 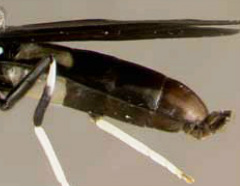 The female Black Solider Fly has a scissor like structure on its tail end. This is the females sexual organ for mating and ovipositioning. 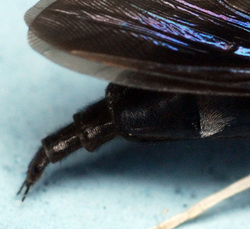 The female Black Soldier Fly has a scissor like structure on its tail end. This is the female sexual organ for mating and oviposition.

In an article written by Spring Yang of Black Symptom Soldier Fly "When the female pull their tail out it means they are ready to mating, and the males will see this as a signal to initiate the mating, if it's able to see, and this is probably why light source is so important for successful mating."(Yang, 2013).

In conclusion identifying males from females’ physical traits is a skill very needed and important when it comes to black soldier fly rearing and measuring success. When you can measure and more accurately predict yields you can run a more efficient colony. Thank you to our friends at Symptom Black soldier Fly for letting us curate this content! Check out their blog and website in our references.